Tweed is an all year round classic suit and blazer fabric, but because of its thickness, it's especially popular in fall and winter. Wear it as a full suit or as separate pants and blazer pieces - with Tweed it all works! Design your custom sport coat at Hockerty.  You might have hesitation toward this fabric because it has a reputation of being quite difficult to pull off, but don't worry! Even the most dapper to the simplest lad can wear Tweed. In this Tweed Fashion Guide, we will tell you everything about your new Tweed Blazer:

First things first, What is Tweed?

Tweed is a type of woolen material. It originated in a fabric-producing region in Scotland, near the Tweed River, during the early 1800s. However, the river isn’t its namesake, as someone elsewhere misread its original spelling of “tweel weave” for “tweed weave”, assuming this false connection of names. Nonetheless, the name stuck and its popularity soared. In the production of tweed fabric, it is woven in intricate ways to create different, typically diagonal, patterns such as plain, twill, herringbone and check. Plain may be the most frequently used pattern of tweed, but it is much more complex than what it seems. While the plain pattern may be just one color, it is given depth in several ways. For instance, various shades of one color could be used in the weave. Also, different colors can be woven in one thread to build on the pattern. This goes to show the balance of complexity and simplicity of tweed, as the simple structure and color palette blends with the complex weaving and patterns. The colors and patterns have made this fabric a very popular choice for blazers and suits. However, it has also served as material for caps, gloves, trousers, and liners. Most commonly, the fabric is dyed with various combinations of earth-tone colors, like different shades of brown or blue. Though it can be rough and unfinished, it’s both wind and water resistant. Hence, it isn’t surprising to learn that this was first designed for farmers and other outdoors men. Eventually, because of tweed’s durability, one of its most favored forms has become that of a sports jacket, perfect for enduring the elements when outside.

When to Wear Tweed

Tweed can be worn at any time as it's easy to dress up or down. It's acceptable to wear it as a blazer or a full suit. If you want something to wear to the office, you could wear a tweed blazer. On the other hand, if you need something for after-work events, it works great for wearing as a suit. Whether you’re wearing it for an evening out as a blazer, or to a formal event as a full suit, this material is versatile for any occasion. Because of its thickness, the material is most frequently worn in fall or winter because it will keep its wearer warm. However, it isn’t rare for it to also be worn in summer. Some tweed is designed to be light-weight and retain less heat, making it sufficient to wear in the warmer seasons. Additionally, the water resistance helps prevent the dampness from weather from penetrating within, so wearing it in summer isn’t too surprising either. 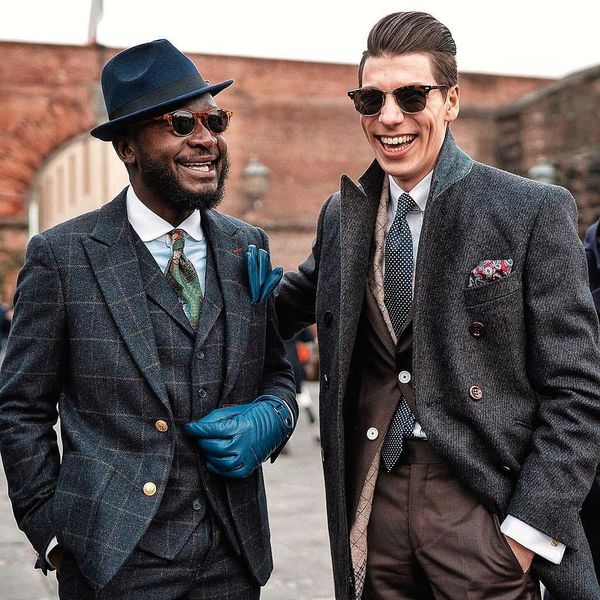 How to Wear Tweed

To better show the numerous ways you can wear tweed, we have put together some alternative outfits for you:

A grey tweed blazer paired with an elegant white dress shirt and a navy blue pocket square. This look is designed for day-time office wear, as well as for casual evening occasions. The colors of the blazer and the white shirt are subtle. However, adding the accessory of the bold midnight blue pocket square adds a small, smart flare to the ensemble that builds on its sophistication. Not too flashy, it creates a professional look that shows careful consideration in its assembly. 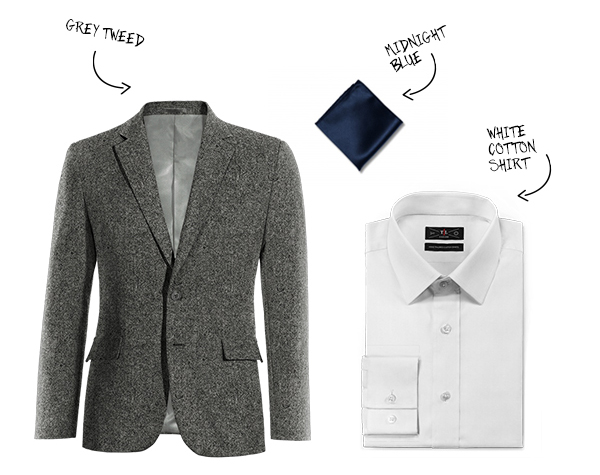 A blue tweed blazer paired with a blue shirt and beige chinos. This outfit is the perfect look for a lunch date or weekend occasion where you want to look dapper, but not "too dressy". By choosing no accessories (tie, bow tie, or pocket square) and a linen shirt, this attire is stylish and ideal for casual business environments or dinners. The two different shades of blue between the shirt and blazer match perfectly well and create a nice contrast between the beige of the chinos. However, the contrast isn’t off-putting and adds to the look a more polished feel. 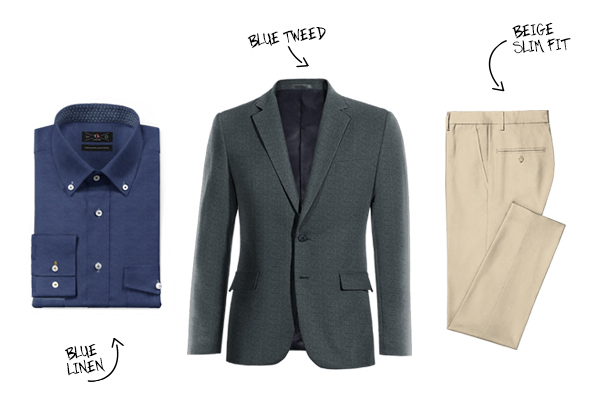 A brown tweed blazer paired with grey chinos and a classic blue shirt. This works for more casual-business environments and occasions. The brown blazer has a fine, warm color that isn’t too bold or flashy for an informal environment. However, the touch of blue from the blue oxford shirt pops a bit out from underneath the tweed, allowing the outfit to stand out a just enough.

This is a sophisticated look that works for any occasion; a Checkered Tweed blazer paired with a white dress shirt and navy blue chinos works for most occasions, even the office. Unlike the other tweed articles, this blazer has a more visible, squared pattern that adds to the style. Because of this pattern and mix of colors in the tweed, selecting a white shirt and darker pants go together well with the blazer and not compete with it.

Remember to dress up or down your look by adding, or removing, accessories such as ties, bow ties, scarfs, watches, or pocket squares. For the most dress look, add a tie/bow tie and a pocket square. On the other hand, to create an informal look, less is more. Thus, removing an accessory will create a more casual style. Lastly, in order to look clean and stylish, remove all accessories for an even more casual outfit.

"Mixing it up with this tweed, custom, beige blazer from Hockerty.com. It’s a bit more casual so I paired it with a short button down collar shirt, tie, loafers, and chinos." @dapperprofessional. Find the direct link on our Facebook account. #men #menswear #menfashion #ootd #outfitoftheday #fashionaddict #fashionista #fashioninsta #instafashion #igers

Time to make the most of tweed suits before the spring comes, don’t you agree?? Come & design your #custom suit at ⏩hockerty.com⏪ #hockerty #hockertysuits #tweedsuit #madetomeasure #custommade #tailormade #tailoredsuit