There’s been quite a lot of buzzes recently over actor Joaquin Phoenix and his brilliant performance in the latest big screen incarnation of one of pop culture’s most iconic villains, The Joker. His stellar portrayal of the complex character, which is already causing a lot of talk regarding possible best actor nominations and confirmed as the winner of the Actor as a Leading role actor. His excellent approach to the character is hugely amplified by this new joker costume. To be specific, the Joker’s striking three-piece red suit and trousers with yellow vest lent a great deal of depth and visual impact to a character that we all love to hate.

While the Joker has been previously depicted in a purple suit, as seen in both Heath Ledger’s and Jack Nicholson’s versions of the character, as well as by Caesar Romero in the original Batman series, two-time Academy Award-winning costume designer Mark Bridges took a creative license for the new film. He updated our new Joker’s wardrobe without losing any of the visual effects and character associations. It helped bring the freaky character to life. The Joker’s appearance was truly a highlight in a standalone film that focused solely on him.

The Joker’s suit and his overall appearance are among the major tools the film uses to transform Joaquin Phoenix from failed comedian Arthur Fleck to the obnoxiously evil Joker. As the Joker wears his horribly wide and exaggerated red grin, he’s dressed in a bold red suit and matching trousers.  The perfect fitting is caused by the made-to-measure suit. The Joker wears his peak lapel suit undone, which is frankly how you could also describe his mental state. Beneath the striking red suit is what looks to be a semi retro printed, blueish-green button-down shirt. The button-down shirt is then paired with a purposely uncoordinated bright yellow, almost mustard-toned vest. Both of which are worn completely buttoned, with the shirt closed all the way to the neck. Wearing all three outlandish colors together certainly lends itself to creating a ridiculous and clownish appearance. While the colors are fresh for the Joker’s outfit, they are still within the spectrum of colors worn by past Jokers. Maybe it is not the same but you can also choose a maroon suit so then it would be more versatile, but not exactly the same as the joker original suit.

GET THE JOKERS' SUIT

Accessories to copy the joker costume

The Joker’s accessories also amplify his malicious and imbalanced persona. No detail goes unnoticed, which includes long white socks and two-tone brown shoes. White socks are, of course, never actually worn with a tailored and sartorial suit. While his oxford lace-ups look well-worn and distressed. His brazen ensemble, with all the striking colors and various details, is almost a depiction and outward reflection of his dangerous and unhealthy mental state.

Of course, the full effect of the Joker’s look isn’t complete without his crazy makeup and hair. His makeup was created by artist Nicki Ledermann and the Joker’s broccoli inspired wig was brought to life by Emmy-winning hair designer Kay Georgiou. The villain’s full-face painted in white makeup, with overly wide and overly red lips, along with small red menacing eyebrows painted as arcs high on his forehead, a matching red-tipped nose, finished off with large blue diamonds painted over both his eyes, all of which eventually appear cracked and smudged on his face. Add to that his displeasing hair, chin-length and in a strange blue-green color tone, worn slicked back and styled to look greasy, and the crazy villainous ensemble is complete. 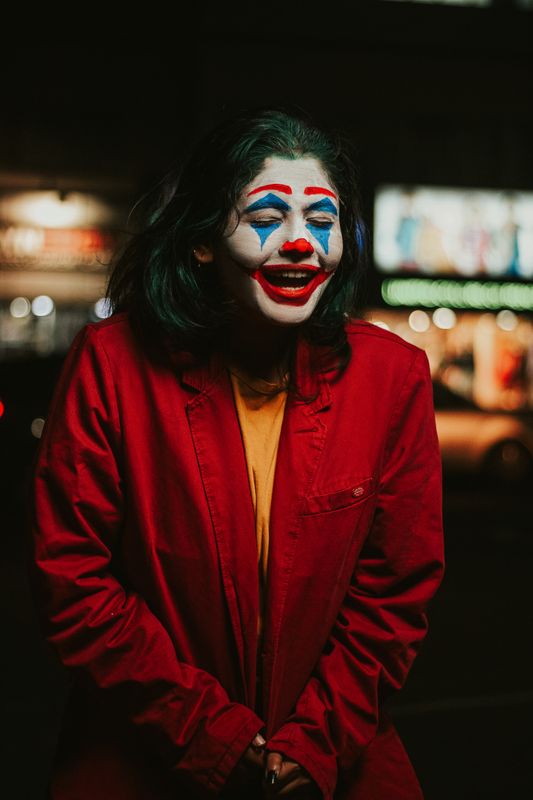 GET THE JOKERS SUIT

You can be sure that every part of the styling, from the character’s wardrobe, makeup and hair, which of course include the eye-catching red suit, trousers, and his dirty green wig, were painstakingly considered and selected. Each garment, including their intense colors, says something about the character through artistic visual interpretation. The overall effect of the look perfectly supports Joaquin Phoenix’s incredible acting skills. While the latest Joker’s wardrobe veers from the traditional costume of the character, it just as richly portrays the despicable villain’s persona. All the details of the joker outfit have helped Joaquin Phoenix to win the most precious award for an actor: Oscar as Actor in a Leading Role for his performance as Arthur Fleckin Joker after 3 nominations in this category.

Take a look at the brown and black dress shoes from the joker. Some people will call them spectator shoes but they are not exactly that. You can design them with our custom dress shoes configurator. With these joker dress shoes you will be the joker 100% and you will have the perfect costume.